In the space of a year, the volume of 4G traffic on the Orange Belgium mobile network went from 50 to 80%, exceeding that of 3G. This expansion of mobile broadband was made possible by the ongoing commitment of long-term investments in both network coverage and capacity.

In 2016, the continued drive towards ultra high-speed broadband continued through deployment of the 4G network, taking national coverage to over 99,9% by the end of 2016. 4G coverage is now more or less equivalent to that of the 2G network. Customers are benefiting from this for their connectivity requirements: at the beginning of 2016, the Orange mobile network traffic was split roughly 50-50 between 3G and 4G traffic. By the end of the year, 4G communications accounted for 80%.

During the summer of 2016, Orange Belgium was able to showcase its excellent 4G network coverage at some of the biggest festivals, successfully using the 2600 MHz frequency band for the first time to improve its network capacity at such events.

Meanwhile, Orange’s 4G+ network, which offers speeds up to 4x faster, is also gathering momentum. It already has outdoor coverage of around 54%. Thanks to better coordination of radio frequencies (upstream and downstream traffic) and better traffic congestion management, Orange has managed to leverage improvements in 4G+ to make a noticeable difference to all users, not just those with 4G+-compatible devices.

At the same time, the company has also been carrying out 4.5G configuration tests which offer download speeds up to 8 times higher than the 4G network by ensuring optimal coordination of three frequency bands. In 2017, Orange Belgium will continue its deployment of sustainable 4.5G configurations.

To ensure the smooth increase of the total mobile network capacity of 70% for the year (an impressive increase given demand for mobile data), Orange has considerably increased the performance capacity of various links in its network infrastructure. This operation to increase load capacity is being implemented at a number of levels.

At cell level, capacity is being increased by software updates and the activation of new frequency bands for potentially overloaded cells. In 2016, considerable deployment of carrier aggregation software on both 800 and 1800 MHz frequency bands has led to improved service for customers. Around 50% of the Orange network now benefits from this technology, which combines the better coverage of the 800 Mhz band with the speed of the 1800 Mhz band. This provides the winning combination of coverage and speed.

At core network level, the company has extended its software and hardware capacities, and simplified the technologies used. Generally speaking, the company is vigilant about not accumulating technology layers and keeping its cost structure under control.

The backhaul network (aka the intermediary network) which provides communications between the core network and the base stations has also benefited from ongoing optimisation work, particularly fibre-optic installation to support the ever-increasing bandwidths.

All these investments in the future of the network guarantee an infrastructure which can meet the demands of future generations.

Orange Belgium has been carrying out painstaking work to ensure network quality is optimised in a targeted fashion, focusing particularly on geographical areas of increasing user data demand. One notable exercise has been the targeting of commuters who, stuck in tunnels, want to be able to make the best use of their time. Great efforts have been made to clearly improve the quality of the Orange network along the main arterial road and rail routes, including the underground network.

It is now possible to stream films via 4G (for passengers, obviously) along most of Belgium’s major motorway routes.

This is the kind of situation no-one wanted to have to put to the test. At the time of the terror attacks on Brussels on 22nd March, the Orange network proved its resilience in the event of a massive usage surge.

Orange entered the fixed Internet and digital TV market by commercially exploiting the regulated opening of the cable networks. The infrastructure relies on the cable operators. In order to be able to offer this service, Orange had to create an infrastructure to manage access rights for Internet and TV channel content, which required considerable work to align processes, and the support of a solid IT team.

Orange Belgium is also keen to clarify and rationalise its offering of fixed telecoms infrastructures for business. Following the scheduled termination of the Proximus unbundling on the ADSL network, the operator is offering its customers three migration options: to its partner EDPnet for fixed networks, to the new Proximus access offering, or to the cable network. 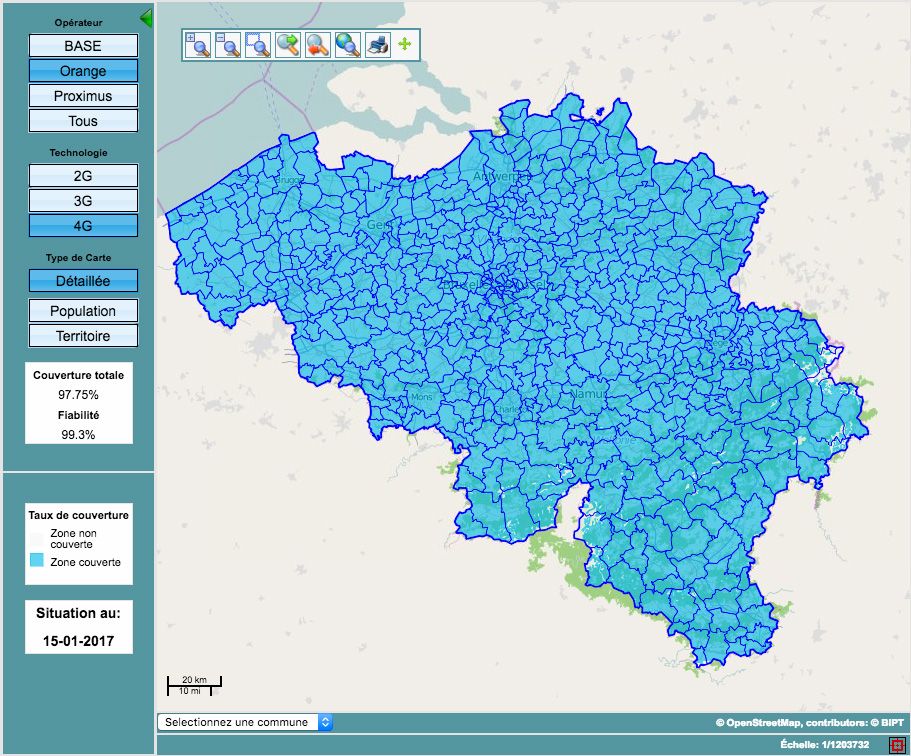 The quality of the Orange mobile network coverage has been clearly confirmed by the IBPT (Belgian Institute for Postal services and Telecommunications).