Orange Belgium’s relation with the investor and analyst community

Orange Belgium Investor Relations team aims to create a trustful and long-standing relationship with the financial markets and all its participants by being a reliable and timely source of relevant financial and strategic information about the company, its performance and the market it operates in. In doing so the IR-team plays an important role in assisting both investors and management in their decision-making.

Orange Belgium’s shares (ISIN: BE0003735496) are listed on Compartment A of Euronext Brussels. Compartment A comprises the listed companies with a market capitalization above 1 billion euros. On May 9, 2016 the name and ticker on the stock exchange have changed from Mobistar/MOBB into Orange Belgium/OBEL (the ISIN code has remained unchanged). The first quotation of Orange Belgium took place together with a “Bell Ceremony” upon initiative of Euronext in Brussels with the opening of the financial markets.

In a year marked by political instability and upheaval, global stocks were up on signs of improving U.S. economic growth and aggressive central bank stimulus measures around the world.

European stocks ended 2016 at almost the same level at which they started the year. The Stoxx Europe 600, a benchmark of major companies across the continent, was down 1.2% year-on-year. The year 2016 was characterized by plenty of volatility following a series of tragic events in Europe and the concerns about EU stability and the potential for an economic downturn following the decision of British voters to leave the European Union. However, despite these events the European markets staged a strong bounce-back rally in the final few days of the year, partly supported by the continuation of the European Central Bank’s stimulus program.

The telecoms sector was the worst performing sector in Europe in 2016. The Stoxx Europe 600 Telecommunications index fell by 15.8% year-on-year. The sector fundamentals continued to improve in 2016 with the recovery of mobile service revenues and the stabilization of fixed service revenues. Though the simple consolidation theme, which attracted new investors to the telecommunication sector over 2013-15, faded as regulators blocked or challenged deals and highly anticipated deals fell apart.

Following a strong rally at the end of 2015, Orange Belgium’s share price traded down from 22.0 euros at the beginning of 2016 to 18.0 euros on February 9, 2016, reaching its lowest level of 2016. This initial period was marked with uncertainty on the qualitative pricing of the wholesale cable regulation. However, mid-February, the Belgian regulator BIPT published its final conclusions, allowing Orange Belgium to proceed with its convergent Orange Internet + TV offer, which was unveiled early March 2016. Soon thereafter, the decision was communicated to rebrand Mobistar into Orange Belgium. On the back of this commercial news flow the Orange Belgium share price recovered quickly over the following months, further supported by encouraging first quarter results and the signing of the agreement on the termination of the MVNO contract with Telenet, securing a minimum payment of 150 million euros. While the returns of the Stoxx Europe 600 Telecommunications index started to fall in June 2016 following the break-up of the merger talks in France, Orange Belgium’s share price continued to trade sideward until October, as the progressive communication on the Orange Belgium rebranding and the nationwide launch of the convergent Orange Internet + TV offer created a positive dynamic. On September 26, the share price reached its highest level in 2016, however unjustified doubts on the robustness of the mobile pricing environment in Belgium caused Orange Belgium’s share price to retreat in the last months of 2016. 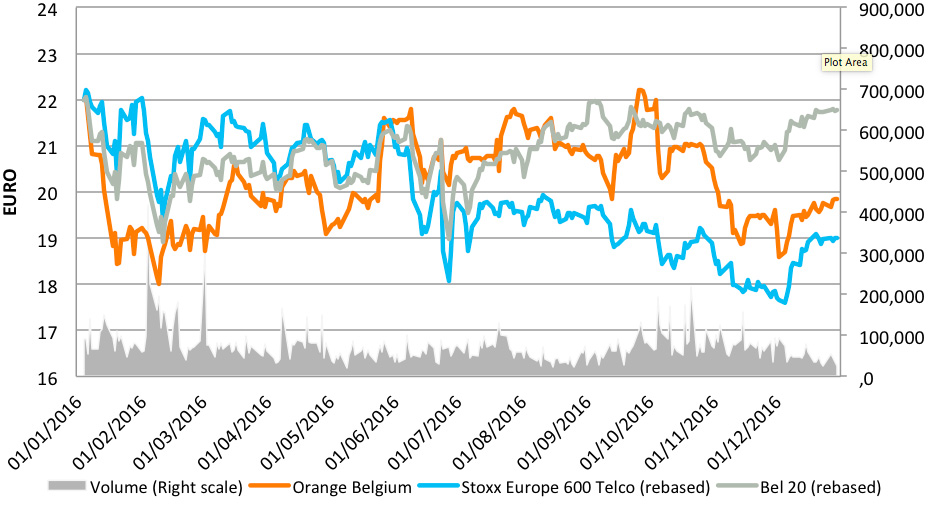 Orange Belgium’s shareholders’ structure in terms of institutional holding by region and style remained balanced in 2016. The Orange Group, indirectly via its 100% subsidiary Atlas Services Belgium, remained the largest shareholder with a stake of 52.91%. The majority of the remaining Orange Belgium shares are held by investors from the UK, followed by investors from Continental Europe (excl. Belgium), North America, Belgium and the rest of the world. In 2016 investors from the UK and the rest of the world reduced their position in favor of investors based in North America. Orange Belgium’s shareholder base remains largely characterized by value-oriented investors. This is followed by growth investors holding. Yield based investors are not well presented in Orange Belgium’s investor base. Low and medium turnover investors are the two largest groups within the institutional investor base, which is a positive signal for Orange Belgium’s stock as these investors provide stability with average holding periods of 4+ years and 2-4 years, respectively. Ownership by very active turnover investors, typically holding on to their Orange Belgium shares for 1-2 years and less than a year increased in this reporting period.

According to Orange Belgium’s bylaws, an increase above (or decrease below) the following thresholds requires a declaration to Orange Belgium on anske.deporre@orange.com and the Financial Services and Markets Authority (FSMA) on trp.fin@fsma.be:

On 9 May 2014, Orange Belgium received a transparency declaration from Boussard & Gavaudan, stating that, as of 18 April 2014, Boussard & Gavaudan Asset Management LP holds 1,810,714 shares, representing 3.02% of the total share capital of the Company.

On 19 January 2015, Orange Belgium received a transparency declaration from Schroders Plc, stating that, as of 15 January 2015, Schroders Investment Management holds 3,105,040 shares, representing 5.17% of the total share capital of the Company. 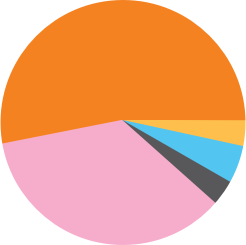 Orange Belgium aims to balance the appropriate cash returns to equity holders with the requirement of maintaining a balanced and sound financial position, while leaving sufficient leeway to continue to invest in its convergent strategy and the build out of its network.

Accordingly the Board of Directors will propose the Annual General Meeting of Shareholders on 3 May 2017 to distribute a gross ordinary dividend for the financial year 2016 of 0.50 euro per share. If approved, the payment of the gross ordinary dividend of 0.50 euro will be done on 17 May 2017 (ex-dividend date 15 May 2017; record date 16 May 2017).

On July 31, 2014 Orange Belgium announced that from August 1, 2014 onwards, it has entered into a liquidity contract with a financial institution and provided them with the mandate to trade the Orange Belgium shares on a strictly discretionary basis on behalf and for account of Orange Belgium. Those transactions are executed on the central book orders of the regulated market of Euronext Brussels. The purpose of this contract is to foster regular and liquid trading. The trading of own shares was authorized by the ordinary Annual General Meeting of shareholders of Orange Belgium on May 7, 2014. In the framework of this liquidity contract Orange Belgium held 14,069 treasury shares on December 30, 2016.

The aim of Orange Belgium’s Investor Relations team is to create a trustful relationship with the financial markets by being a reliable source and provide relevant information that assists both investors and management in their decision-making.

In order to realize this objective, Orange Belgium’s Investor Relations team has developed a year round communication program, entailing:

The number of brokerage firms that have actively published equity research notes on Orange Belgium stood at 21 and shows a good mix of local and international analyst coverage. Each quarter the analysts are polled for the estimates, providing the company with a detailed overview of the market expectations. This consensus is made publicly available on the company website.